NDC Signs a Euro 5 Million Financing Agreement with the AFD 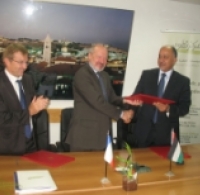 On Tuesday, September 7, 2010, the NGO Development Center (NDC) signed a financing agreement with the French Development Agency (AFD) for a total amount of Euro 5 Million over a period of four years. The signing ceremony took place at the NGO Development Center in Alram. The agreement was signed by Mr. Herve Conan, the Country Director of the AFD, Mr. Ghassan Kasabreh, NDC Director, and by his Excellency the Consul General of France in Jerusalem , Mr. Frederic Desagneaux.

This financing agreement comes after a long period of joint efforts of both the AFD and the World Bank for a new phase of programmatic support to Palestinian NGOs through NDC in close coordination with the Palestinian Authority.  It is worth mentioning that a parallel agreement was signed between the World Bank and NDC on August 2, 2010 for an amount of US$ 2,000,000.

In addition to funds allocated to Palestinian NGOs to support selected relevant projects which improve services to population, these joint efforts aim at harmonizing donors’ support to NGOs ensuring complementarity between NGOs interventions and Palestinian Authority actions with a view to enhance the efficiency and quality of support provided to NGOs and the end beneficiaries.

It is worth noting that the AFD started its support to the NGO development Center in 2003 and is currently a key donor and partner to NDC.